Google announced the September 2019 Core Algorithm Update on Tuesday. The update started rolling-out the same day but the roll-out is slow. 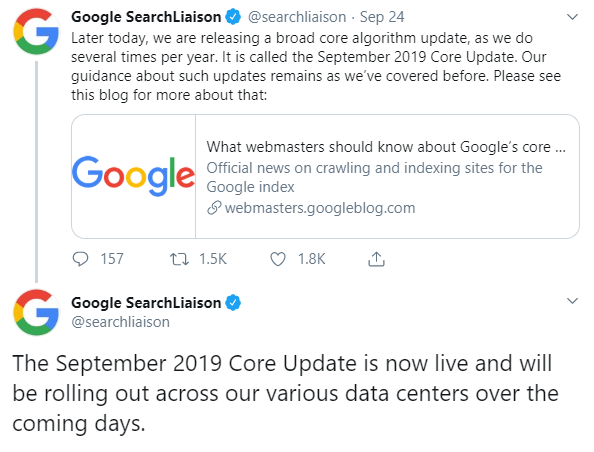 Some webmasters have seen some significant changes while others have not noticed anything out of the ordinary yet. The chatter in the SEO Community is also limited.

It’s not uncommon for an algorithm update to take a few days before you start seeing any significant changes. Danny Sullivan from Google took to Twitter to say the same. He tweeted it may take a few days for the update to roll-out completely. The update is applied globally and affect all search index, covering all markets.

The last core update took place in June. The update has hit the sites that did not follow new Google Search guidelines by E.A.T update. September Core Update has come after two major changes this month-

Many times the ranking fluctuations after a core update are not the direct consequence. It can be a snowball effect of a major and some smaller changes. It’s vital for you as a webmaster to keep an eye out for any new updates on Google. And also monitor your performance after each update.

As for now, it might take a few days before you start noticing any fluctuations in your ranking due to the new update. If you have noticed any changes yet. Read this blog posted in Google Webmaster to know the best way to deal with the changes of a core update.