While people were having a relaxing weekend, Google was at work. At around 1:30 pm yesterday night, Google SearchLiaison announced via a tweet that a core algorithm update is on the horizon. The update called ‘June 2019 Core Update’ is all set to roll out today. 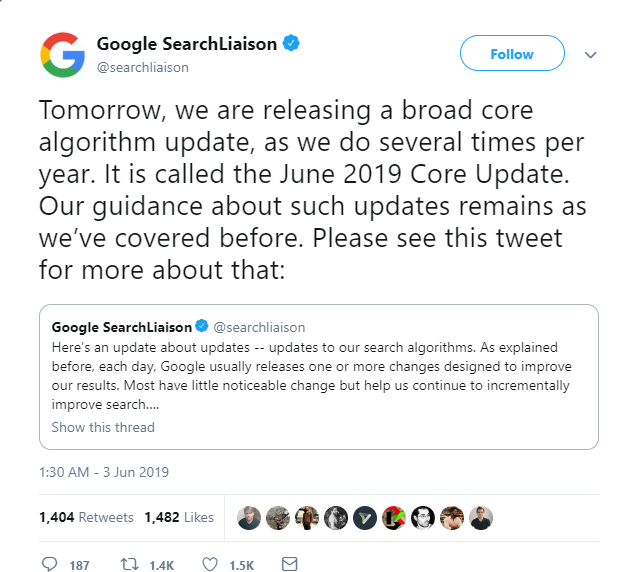 Linking it to a tweet from 11th October 2018 called ‘An update about update’, Google stated that it releases, each day, one or more changes that focus on relevance in search results . 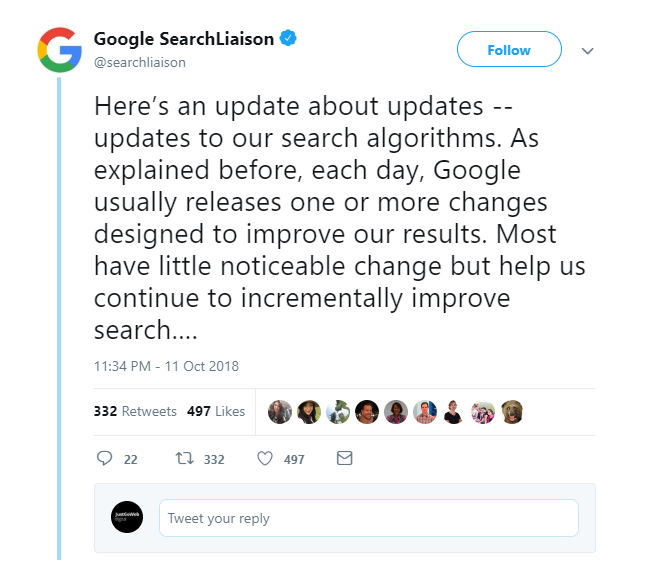 Google confirms very few core ranking updates that it performs throughout the year. Google has stated several times that when it comes to broad core updates there is nothing specific you can do to fix your ranking. Updates are not generally about targeting specific kinds of low-quality websites. Generally, these kinds of updates are more about how to improve Google’s understanding of search queries and the way it responds. In March 2018, Google SearchLiaison tweeted, after a broad core algorithm update that took place a week before the tweet, that “there is nothing wrong with the pages that now perform less well. It’s that changes to our system are now benefiting pages that were previously under-rewarded.” 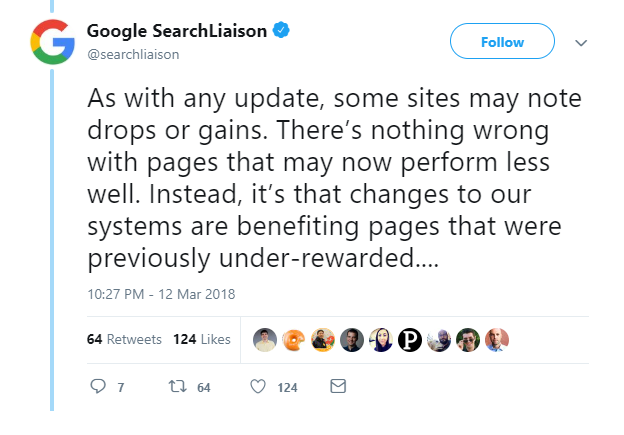 Google Algorithm Updates are usually considered as a harbinger of doom. Consequently, uproars about witnessing traces of de-indexing and canonical issues are already making the rounds in the tweet’s comment section. Google updates usually take a week to 10 days to bounce back and hence it’ll be wise to follow Google’s own advice and wait. Broad Core Updates are usually about relevance in the search engine. ‘Site Quality’ does play a role but it is not all that matters, hence, in a haze, you would not want to change something that ultimately ends up not being the problem at all. If your ranking is in fact affected, the best approach to solving the problem would probably be, asking yourself why Google is not viewing your website as relevant anymore to your targeted keywords.

However, despite what it says, Google’s tweet is being taken as a prior warning and is already causing a lot of anxiety. No matter what happens, at least, we know the one place this week where the SEO companies need to keep an eagle’s eye on.

Sakshi Singh is a content marketing specialist at Justgoweb Digital. She has a background in content marketing, storytelling and journalism. Sakshi's editorial focus blends digital marketing and creative strategy with topics like SEO, SEM, and display advertising.
Get instant callback